I had this site saved for quite some time but it appears that the watermill page has now disappeared.

It's too bad, because it was a very interesting concept, although it was still in the testing stage. It used the same "wheel" generator system that e-traction is using to power buses.

Here are some pictures I had saved of the watermill.
. 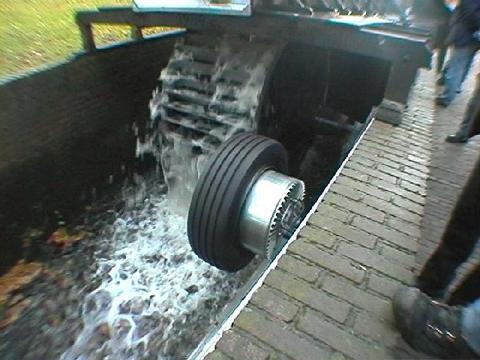 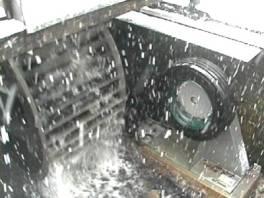 .
I found the whole concept fascinating, as I have often been surfing around reading about off-grid power sources.

This watermill produced 20,000KWH per year, which is about enough to provide power for two average homes. I had roughly converted the cost, and guestimated the overall expenses to be $25,000 - $30,000, although that was several years ago now. I can't recall exactly for how long they had it running, I think eight years or something like that, and it was still humming along fine. Many watermills, I have read, last for 30 years or more, although they need to be stopped and serviced once or twice a year - just like a car.

But, think about it. Although it would be one of the most expensive initial investments to produce off-grid electricity, over the long haul, it is not a bad deal at all, given the savings in electricity over the years. Also, given that it provides far more electricity than is needed for a single home, you could probably also power a nice little workshop with it... or sell that excess electricity to a neighbour.

The problem with many off-grid electricity sources such as solar or windmill, is that it is not constant power. But, if you had a year-round creek on your property, I would think that it should be able to produce electricity at a steady rate, no matter the time of day, the weather, or the season. In the winter, ice would not form if the wheel kept turning. The only thing I wonder is how much of a pain in the ass it would be to have those government bureaucrats approve it for use in a water source. They can be quite the stinkers already over even simple things like putting culverts and such in a driveway.
.
Posted by . at 11:54

Email ThisBlogThis!Share to TwitterShare to FacebookShare to Pinterest
Labels: Off-Grid